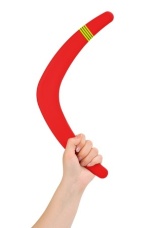 One of the unexpected joys of my teaching career is that I have had the opportunity to teach students of all age levels.  I have taught preschool through high school seniors, and now even supervise college level students doing their intern teaching.

Mikey is a boy I taught in preschool when he was three and four years old.  He was the biggest boy in class even though some others were a year older than he.  He was also friendly, affectionate and funny.  You just had to love Mikey and everyone did.

Fast forward about twelve years.  I was teaching high school juniors and seniors in a Teacher Academy program when I noticed a name just like Mikey’s on my class list.  Could this possibly be the same boy?  No way.  I was in a different district than where I first met Mikey and I was teaching high school, not preschool.  But sure enough on the first day of school in he walked with a big grin on his face.  I didn’t recognize him at first.  But then he spoke.

And just like a boomerang, Mikey was back in my life.  It was evident pretty quickly that Mikey had become Michael.  He was 6’4″ inches tall and weighed between 275 and 300 pounds depending on whether or not it was football or wrestling season.  But his basic personality had not changed at all.  He was friendly, easy-going and kinder than the average teen.

I remember one time I was lamenting about my students falling into a habit of arriving late to class.  In walked Michael a couple of minutes late.  I gave him my “teacher look” of disapproval.  He didn’t say anything.  He just came up to me later privately and apologized and told me every once in a while he might be a little late to class because he helped his friend Greg get from class to class in his wheel chair every day.  I felt like a heel.  For the two years Michael was in my class I watched him wheel Greg from class to class all day long.  He shared lunch with him in the cafeteria too.  This was not a task that was assigned to him.  He wasn’t doing it to accumulate volunteer hours.  Greg was his friend.  Period.

Michael was kind to everyone, no exceptions.  He was a behemoth on the football field and someone you wouldn’t want to meet on a wrestling mat or in a dark alley; but I always thought of him as my gentle giant.  About a month before high school graduation Michael pointed out to me that I was the first teacher he had ever had when he walked into preschool when he was three.  And then he mentioned that I would be the last teacher he would have in high school for the last bell of the last day as he finished his high school career.  It choked me up when he shared that observation with me.  I hadn’t thought of it, but he had. What a privileged teaching career I have had, to be able to influence this remarkable young man at both the beginning and closing of his school career.

But even that is not where the story ends. Mike went on to college to become an intervention specialist (special educator).  I can’t think of anyone more suited for such a career.  He won’t have to learn how to value all students; he always has.  A couple of weeks ago,  his name popped up on my email.  He has graduated from college now.  He is beginning his job search.  He asked me if I would do some practice job interviews with him.  So there we were last week, Mike and I, now a young man in his twenties meeting at the public library where I put him through a series of mock job interviews for a future teaching position.  We worked together again for a couple of hours.  At the end of that time we shared a hug and I told him to let me know when he had landed a teaching position or to call me with any tough interview questions and we would discuss possible responses.

Michael and I have been passing in and out of each other’s lives now for two decades.  He doesn’t just make other students feel valued, he makes his teacher feel valued too.  How gratifying it is to have a young man still believe that I have something of worth to teach him.  I hope this wonderful relationship continues for decades more. When you’ve been hugged by Mikey these days, you KNOW you’ve been hugged.  He can lift you right up off the floor, both physically and emotionally.

At the risk of repeating myself, I ask this question again.  Where, but in the profession of teaching, can you influence lives so positively and for such a length of time?  The rewards I reap from this career go on and on.  So does my gratitude for all the students who have touched my life in such a wonderful way.

What a teacher writes

on the blackboard of life

can never be erased.

Available autographed or in large quantities from the author:  dauna@cinci.rr.com

Book Dauna Easley to speak to your group:  dauna@cinci.rr.com

Good teachers teach the subject matter and they do it well.  They know their academic area thoroughly.  Their lesson plans are well thought out and hopefully creative.  They are experts in their field.  There are studies that prove that the best way to improve test scores is to thoroughly educate our teachers – to provide them with a deeper understanding of their subject matter.  They then can pass this academic excellence along to their students.

I thoroughly agree with this strategy.  BUT…if you want to become something beyond a good teacher I think there is so much more than academic excellence required.  Great teachers don’t just teach academics, they teach people.  The student precedes the subject matter. Great teachers don’t just teach an academic field. They must teach many things beyond the text.  They teach concepts that help students live a life full of successes that they learn to create through experiences and activities that begin in the classroom.

The truth is I’ve written a whole book about this and it’s not easy to describe briefly.  Also,even as I write this I can hear many good teachers saying,

I don’t have time for anything other than the academics!

I can’t cover all the material even now.

How can I add more?

And technically they are right.  We don’t have extra time for unimportant concepts.  But what I’m describing is important and effective teachers will realize it and integrate it into their lessons.   Great teachers will custom braid success strategies throughout all of their teaching. weaving them over and under the academics they cover, strengthening their students’ learning path into a cord with triple the strength of mere facts.

We have to be honest and admit that we don’t know the world our students will be facing.  Changes in our country within the past decade have resonated that message.  We must prepare our students for an economy we can’t even predict.  They will change not just jobs but careers.  We must teach them entrepreneurial skills, creativity, perseverance, problem solving, and how to set goals and adapt when the  ground under their feet begins shifting in a new direction.

Six Tips for Getting Started

I’m passionate about this topic and hate to stop here.

But I know if this post gets any longer, no one will want to read it at all.  My book describes 100+ such strategies. I think the greatest gifts we give our students are the ones that go beyond the text books. I’m a career teacher and I’m sure of it.  I belive great teachers TEACH…To Change Lives.